“All you need is ears” George Martin once said, and if George says it, it’s true.

And when it comes to mixing music specifically, truer words have never been spoken. Though you spend your time wishing you had the cash to drop on that magical Pultec EQ your time would probably be better spent honing your ear and getting your EQ chops up.

Enter TrainYourEars, a plugin designed to do just that.

Using an audio track that you load, TrainYourEars offers a unique twist on aural training that makes achieving those golden ears that much easier (while still seeming maddeningly elusive of course).

The product is simple to use, but wasn’t, for me at least, when I first started. This is my fault. Take a look at the opening screen: 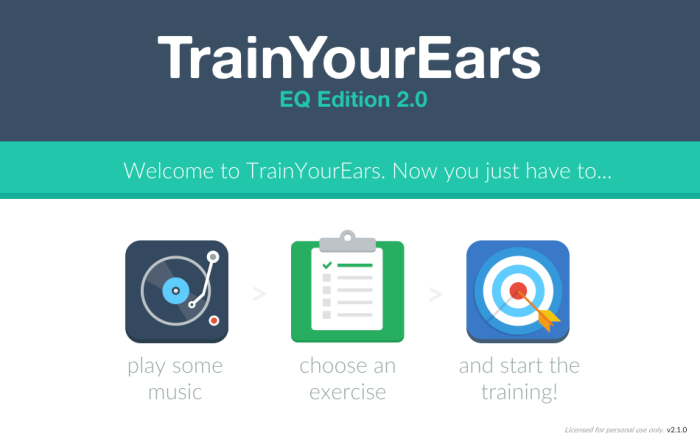 I didn’t read that, I just clicked through. It therefore took me a few minutes of clicking around before I realized how the software actually works. Duh. It’s actually really simple.

Just click ‘Play Some Music’ and load a favorite track into the app (FLAC doesn’t appear to be supported so I used an MP3). It will now look like this: 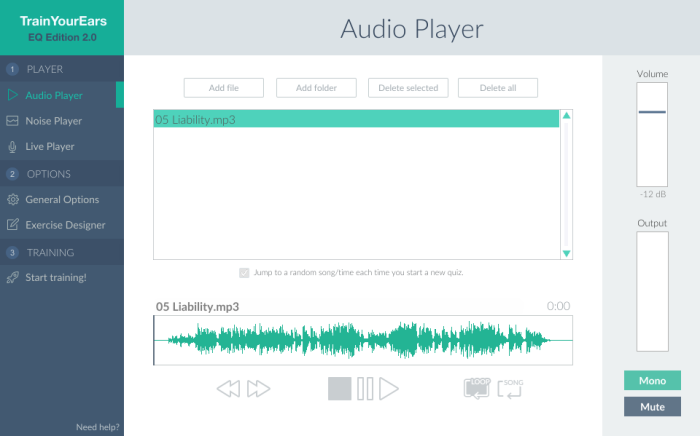 Set your audio going by clicking the ‘play’ icon. This is the key element I missed.

Next, click ‘Exercise Designer’ from the left hand column. What do we want to practice today? There’s a bunch to choose from, basic boosting and cutting all the way through guessing at opposite shelving filters. Wow. 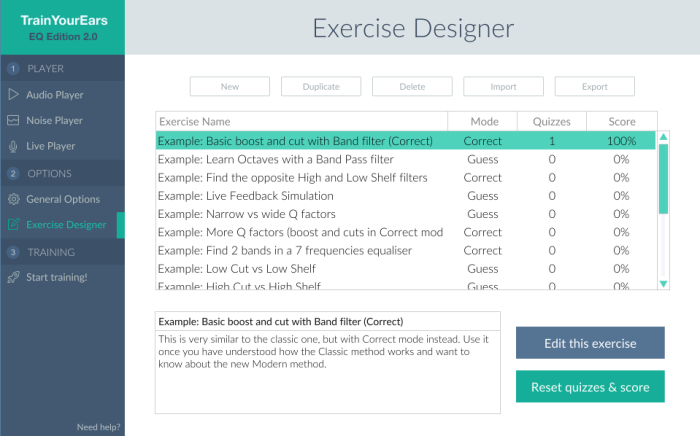 Now just click ‘Start Quiz’. Listen to the original track, listen to an adjusted version, then try to match the original with an EQ move. TrainYourEars will give you instant feedback and a score telling you how you did. You can also use pink or white noise instead of a music track if you so desire (something I find much more difficult for some reason).

Simple, but not so simple.

Sometimes the answer jumps out at you, sometimes its tantalizingly close, yet so far away. Trying to find it is fun though, and that’s one of the things so great about this app. It makes ear training a fun, competitive-with-yourself exercise, instead of just an afternoon wasted fiddling with EQ knobs. 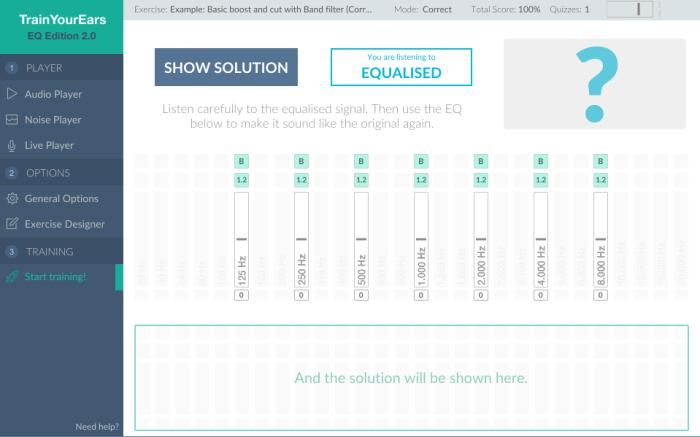 TrainYourEars is pretty darn awesome. I’m okay with an EQ, generally, but after playing with TrainYourEars for just an hour, my confidence was soaring to great heights and I could swear my EQing chops had improved by about 1000%.

If improving your engineer’s ear is something important to you, this is the very best tool to sharpen your technique that I’ve come across. It’s on special right now too, down from 89€ to just 49€.