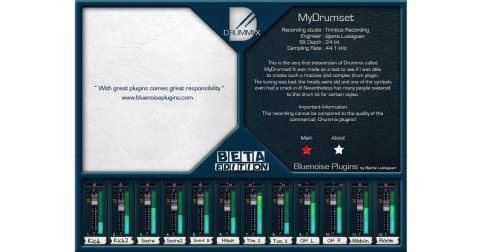 The maker of this drum VST, Bjarte Ludvigsen, insists it’s nothing special.

“The recording of the drums was done very quickly,” he says, “with only me on everything from drumming to engineering. As you can imagine that is not a perfect way to record a drum kit…the drums weren’t tuned, one of the cymbals had a crack in it, the heads were old and I did everything in about 2 hours”.

Still, the public has spoken and this humble VST, the Drummix MyDrumset, has received rave reviews.

This version has three presets: Rock, Rock Olympic and 70′s, all presets being made using a Ludwig Fab Four. These are not polished sounds by any stretch of the imagination. Rather this kit has a slightly indie, slightly lo-fi feel that’s extremely usable and fits right in the mix for rock stuff, especially rock erring on the darker side of the garage.

There’s an option to flick the developer a couple of bucks, so if you like what’s on offer, please do.

PROS: Awesome, organic drum sounds for free
CONS: You’re not gonna get a Danny Carey sound out of this